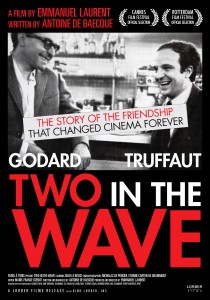 As admirers of the French New Wave directors, particularly Francois Truffaut and Jean-Luc Godard, we can't pass up news related to the Nouvelle Vague.

The new documentary, Two in the Wave, to be released on DVD this month (after screening at limited theatres in the U.S. last year) focuses on the relationship between the two directors—their early friendship and collaborations, along with their writing for Cahier du Cinema through their estrangement.

The film is directed by Emmanuel Laurent with Antoine de Baecque (a biographer of both Godard and Truffaut) contributing the script and narration.

At the Financial Times Tobias Grey takes a look at the two directors and the film documenting their different personalities and cinematic ambitions:

In their documentary Laurent and De Baecque shun a talking-heads approach and instead make judicious use of newspaper clippings, film clips, archive documentary footage and photographs to tell the story of how Godard and Truffaut began by sharing the same dream of cinema, only to end up each hating the other for the kind of films he made.... For a while Truffaut and Godard managed to ignore their creative differences and their friendship flourished. But tensions began to surface during the political upheaval of 1968. While Godard embraced Marxism and signalled his determination to make politically driven, elliptical films, Truffaut steadfastly refused to mix cinema and politics.

Eventually the friendship completely dissolved, in part over a dispute involving a letter sent by Godard to Jean-Pierre Léaud, the actor who appeared in many of Truffaut's films.
Posted by Dwayne D. Hayes at 4:50 PM

Very nice. I'm looking forward to seeing this although it seems to have taken forever to get to the UK. It's such a shame that Godard and Truffaut fell out and ended up hating each other after essentially creating one of the greatest movements of modern cinema together.

There's a whole Truffaut season on at the BFI now too and free tickets to Day For Night.

Thanks and thanks also for mentioning the Truffaut season at the BFI ... wish I could attend.