Arianna Huffington writes about criticism Barack Obama has been receiving because of his popularity in Europe (where a June poll in the Telegraph revealed “a striking level of anti-American feeling” and over 65% of those polled in Italy, France, and Germany indicated support for Obama).

Why wouldn’t we want the President of the United States to be liked and respected by the leaders and peoples of other nations, particularly those of our allies in Europe? One might think that increasing a sense of good will toward Americans and the U.S. would be beneficial to our long-term national security, among other things.

(By the way, I can’t help but wonder which candidate they prefer in McCain’s favorite European "country": Czechoslovakia.)
Posted by Dwayne D. Hayes at 8:12 PM 1 comment:

A SHOUT FROM COPENHAGEN: A TANTALIZING TASTE OF WHEATGRAIN & URGENT PS ABOUT PERIGEE

Allow me to tantalize you with a taste of something so delicious you will crave more – but more of which is not to be found. Not unless you know something that only about one millionth of the world’s population knows – the proverbial one in a million.

Let’s start with a 22-year-old poet named Lise who has never been published before. Lise begins thus:

That’s Lise Møller Schilder, and she goes on for two intriguing pages that most readers of this blog will not, alas, get to read.

Then we’ll take an 80-year-old named Knud Sørensen, who says:

The starting-holes
are a little worn, coal
from the edges has sprinkled down to the bottom

or the 43-year-old Ege Schjørring who proclaims that

or young Peter Bo Andersen whose opening goes like this:

and still later who interjects in the King’s good English,

Now how can you resist that? A poet who proclaims that? Don’t you just burn to know the nothing he remembers?

Or Karsten Bjarnholt, born the same year as I (’44), who wants to tell about a man who stepped in shit and when he tried to get it off his sole got it on his fingertips and was wearing a white shirt and…

And on it goes right up to a concluding six-page “Conversation between a Man and His Soul,” which is in fact 4,000 years old but translated recently by a 31-year-old named Mikkel Thykier who makes accessible these words from Egyptian, starting:

I opened my mouth and replied:
“This is too much! My soul exclaims I disagree with you!”

Tell me, can you resist that? And in between are many other poets, too – twenty-one in all (I will probably get knocked on the head for not including them all but one can’t include everyone and everything, right?). And there is also a cover and several works of art by a man named Ferdinand Ahm Kragh, and a conclusion on page 63 by another artist named Uwe Max Jensen. Uwe salutes farewell with a well-wrought graphic middle finger. Goodbye, goodbye and up yours, he seems to say, the magazine seems to say, Up yours, up mine, up all of ours…

Now what exactly is this, and why can the majority of my blog readers not have access to more? It is the latest issue of the Danish literary journal named Hvedekorn (Wheatgrain), number 2, 2008, edited by Lars Bukdahl and Christian Vind and published by Borgen (www.borgen.dk). This journal has been around since the 1920s, doing its excellent work for more than 80 years.

And why can you not – unless you are one in a million upon this earth – find your way to more than the tiny taste of it offered here? Because it is all written in the Danish language (except for the “fuck you’s” in Peter Bo Andersen’s poem), and Danish is only practiced by about a millionth of the population of this earth.

And what can you do if the above taste of Wheatgrain left you yearning for more? You can:

(1) Learn Danish. If you are more gifted than I, that won’t take long.
Or
(2) Urge the editors to see to it that this issue or selected works there from are translated into English or some other language in which you would wish to read it.

You can do this by writing to Borgen or even directly to Lars Bukdahl (poesi@hvedekorn.dk). But how can you write to Lars Bukdahl if you are unable to express yourself in Danish? Well, I feel confident that you can write to him in English. Most people in this ancient country function as well or better in English than I do in Danish.

Why not give it a try? As Jack Torrance Nicholson says to his wife after she has knocked him over the head and locked him in the walk-in freezer in the Overlook Hotel; “Check it out, Wendy! Check it out!” See what happens.

PS: While I am talking about literary journals, let me urge you not to miss the newly minted issue of Perigee: Publication for the Arts (Issue 21), which is completely in English (including one translation from the Danish). And I am not urging you to do this because there is work by this author in it. No, please feel free to skip the work by me with my blessing, but do not miss all the other wonderful stuff – including the awesome photographs! And access to this magnificent on-line literary journal costs not one red cent – go right on-line to: http://www.perigee-art.com/

Let's be friends (and maybe more)

Check out Absinthe on MySpace and Facebook.
Posted by Dwayne D. Hayes at 8:58 PM No comments:

Check out this short video on absinthe (the drink, not the journal, alas) done by Slate.
Posted by Steven J Stewart at 12:50 PM No comments:

"The Lost Daughter" by Elena Ferrante

I read Italian writer Elena Ferrante's slim but dark novel The Lost Daughter several months ago and in recent weeks several interesting reviews have appeared online: at the complete review, over at Three Percent, and finally at Words Without Borders.

I recommend giving it a read. The novel was published by Europa Editions and translated by Ann Goldstein.
Posted by Dwayne D. Hayes at 9:21 PM No comments:

From the French Book Office

The July newsletter from the French Book Office in London mentions a book that just might find some readers:


Guide des jolies femmes de Paris by Pierre-Louis Colin (Robert Laffont, 2008). For the first time, a precise investigation attempts to divulge the long-await(ed) information: where to find the pretty women of Paris. Quarter by quarter, season by season, young or (not-so) young, wise or debauched, this complete guide leads you to encounters with the women of Paris, and points out where you can discover their innumerable charms.

(I doubt I'll receive this as a Christmas present from my wife.)
Posted by Dwayne D. Hayes at 7:52 PM 1 comment: 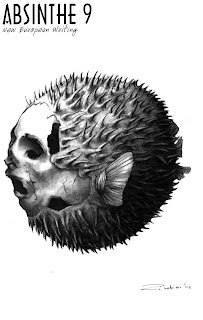 You can now read some excerpts from Absinthe 9 at our web site: stories by Jens Blendstrup and Henning Koch and poems by Carlo Betocchi and Jose Jimenez Lozano.
Posted by Dwayne D. Hayes at 9:00 PM No comments: