Sergei Bulgakov, Bergman, and the Role of the Artist

Over the last few years I’ve been reading work by and about Sergei Bulgakov, the Russian thinker and theologian who died in 1944. Most recently I completed the fascinating anthology Sergii Bulgakov: Toward a Russian Political Theology, edited by Rowan Williams, current Archbishop of Canterbury.

In an essay on heroism he contrasts the hero who “cast(s) himself in the role of providence, arrogates to himself … a greater responsibility than can be borne … a greater task than a human being can encompass” with a “Christian” heroism that is “liberated from heroic posturing and pretension” and “is concentrated on (the) immediate task, … concrete obligations and the fulfilling of them.”

In a later essay this humility and clear-minded focus is deemed necessary for the artist who works amidst the “awareness of (arts) own impotence, in the appalling schism between what is revealed to it of the true splendor of the world and the concrete reality of its deformity and ugliness.” Bulgakov goes on to say that “art yearns to become transfigurative, not just pleasing or consoling; transfigurative in a real, not a symbolic sense” and invokes Dosteoevsky’s famous dictum that “Beauty will save the world.”

Bulgakov’s views reminded me of comments made by Ingmar Bergman in an essay on filmmaking in 1954:

… it is my opinion that art lost its creative urge the moment it was separated from worship. It severed the umbilical cord and lives its own sterile life,
generating and degeneration itself. The individual has become the highest form
and greatest bane of artistic creation. Creative unity and humble anonymity are
forgotten and buried relics without significance or meaning. The smallest cuts
and moral pains of the ego are examined under the microscope as if they were of
eternal importance.

Thus we finally gather in one large pen, where we stand and bleat about our loneliness without listening to each other and without realising that we are smothering each other to death. The individualists stare into each other's eyes and yet deny the existence of each other, and cry out into the darkness without once receiving the healing power of communal happiness…

If thus I am asked what I should like to be the general purpose for my films, I would reply that I want to be one of the artists in the cathedral on the great plain. I want to make a dragon's head, an angel or a devil - or perhaps a saint - out of stone. It does not matter which, it is the feeling of contentment that matters. Regardless whether I believe or not, regardless whether I am a Christian or not, I play my part at the collective building or cathedral. For I am an artist and a craftsman; and I know how to chisel stone into faces and figures.

I never need to concern myself about present opinion or the judgment of the posterity. I am a name which has not been recorded anywhere and which will disappear when I myself disappear; but a little part of me will live on in the triumphant masterwork of the anonymous craftsmen. A dragon, a devil, or perhaps a saint, it does not matter which.

Leipzig has always been important for the printed word. The first newspaper in the world was printed here in 1650. Publishing and printing has been Leipzig’s most important trade for centuries; every second Leipziger was employed in it until WWII. When Leipzig became a Soviet zone at the end of the war, 360,000 businesses and most of the publishing houses fled to the west. The city continued to have an important book fair during GDR times, but here was no freedom of the written word. Since the collapse of the Iron Curtain—the Monday night marches that resulted in the peaceful revolution and the fall of the wall started here-- the city is once again an important laboratory for literature. The Frankfurt Book Fair is commercially more important. Berlin has more publishing houses, but for the sheer exuberance around books and reading, nothing beats the Leipzig Book Fair.

The fair lasted four days (March 18 to 21) and drew 150,000 visitors, 30% younger than twenty. There were 2,100 exhibitors from 39 countries. Events took place from 8:00 AM to well after midnight.Ulrich Blumenbach won the translation prize for David Foster Wallace’s “Infinitive Jest,” Ulrich Raulff won the prize for Non-Fiction/Essay for his book “Kreis ohne Meister,” a biography of the poet Stefan Georges. Georg Klein won the fiction prize for “Roman unserer Kindheit.” The Hungarian author György Dalos won the Prize for European Understanding for his books “Der Vorhang geht auf” (The Curtain Lifts) about the end of dictatorships in Eastern Europe.

The Leipzig Book Fair is pivotal for small independent publishers, especially those from Eastern Europe. Many Eastern European publishers can only afford to attend one international fair and most choose Leipzig. I enjoyed the exposure to literature from Bosnia-Herzegowina, Kosovo, Albania, Macedonia, Serbia, Bulgaria, and Ukraine. Many of the writers have not been published in the West. The translations were often financed by German foundations.

My first impression of the fair was visual and auditory overkill. Publishers staged a dramatic struggle for readers. They presented titles with the most commercial potential. VIPs were surrounded by autograph hunters. There were countless readings, discussion groups, book signing, mini-concerts by music stars, and garish manga-graphics. Visitors walked around with gigantic shopping bags to collect free gifts, buttons, stickers, pens, brochures, book samples, and audio books.

But then I discovered another Leipzig Bok Fair: the fair for writers and readers. With more than 1500 writers and 2000 readings and events, the fair is the largest reading festival in the world. Readings took place at 350 venues, in hair salons, cinemas, the cemetery, the opera, and the aquarium. My personal highlights were Balkan Night (music and readings) and the event at the Polish Institute where a collective of translators (Germany is worldwide the most important country for translators) spoke about translating the Ukrainian author Otar Dovzhenko, and the award ceremony of the Kurt-Wolff Foundation. Leif Greinus and Sebastian Wolter, two young publishers who started Voland & Quist Verlag in Dresden won the prize for most promising publishers. They specialize in authors from the spoken word scene. Klaus Wagenbach won the main prize for lifetime achievement. The event took place at the Connewitzer Velagsbuchhandlung, an independent bookstore and publisher. The upper floor of the bookstore was bursting at the seams. Voland & Quist introduced one of their authors, the talented poet Nora Grominger. I had seen her at City College New York a few months ago when the Creative Writing department invited her to present her work.

Wagenbach prides himself that he publishes books readers should read, not just books readers want to read. He spoke about his career and read from his forthcoming memoir. He started his publishing house after he’d been fired from Fischer Verlag and moved his business to Berlin in ‘64 when, because of the erection of the Berlin Wall, everyone else was leaving Berlin. He wanted to create an East-West Berlin press for he believes that Germans have a common history and language and that literature could be our bridge. He published the East German dissident Wolf Biermann—the manuscript was smuggled into West Berlin in installments. The GDR government retaliated by blocking all licensing of East German writers for him.

He is known as a courageous, courage-inspiring exemplary publisher who introduced Germans to the work of Alberto Moravia, Boris Vian, Natalia Ginzburg and Alan Bennett.

I listened enraptured to him and Nora Grominger sitting on a sofa made of books. After the event, I met Mama Hinke, the mother of Peter Hinke and owner of the bookstore. She had prepared a scrumptious buffet and had made all the Schnittchen herself. This too is love for literature in Leipzig, I said to myself, pleased that I had made the journey.
Posted by Anna Steegmann at 10:00 AM No comments:

Email ThisBlogThis!Share to TwitterShare to FacebookShare to Pinterest
Labels: A Fair for Readers and Writers 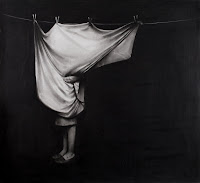 It appears that activity on this blog has come to a standstill and I’ve decided to try a different tact. Obviously I’m not writing here often and my time to do so is extremely limited so I’ll make an attempt to write a longish note once a week, most likely on Friday. I should also mention that we are always interested in adding contributors to this blog to write about all things European: writers, books, cinema, design, art, music, etc. If you are interested feel free to drop me a line at dhayes@absinthenew.com.

Ok, in Absinthe news the special Romanian number is currently at the printer and will be available in early April. It’s an excellent issue with texts from eleven authors, selected by Bucharest-based author and translator Jean Harris. The art by Mircea Suciu is very cool and appears on the cover and in an 8-page insert. You can preorder a copy of Absinthe 13 here.

As mentioned previously, with limited time I’ve had little time to blog. And this time issue also impacts the books I choose to read. I rarely read books over 400 pages now. Yes, I agree, this is a problem. I’ve so far missed out on Verhaeghen’s Omega Minor and Bolaño’s 2666, both sitting sturdily on my bookshelves (though after completing Bolaño’s Monsieur Pain the other night I’m ready for more). However, I did recently finish Orhan Pamuk’s 500+ page The Museum of Innocence. It’s a very good read but am I the only one who grew weary of Kemal’s obsession with Fusun? Or was he obsessed with obsession? Still, if Pamuk is really opening a museum in Istanbul, I’d want to see it.

The schedule for the PEN World Voices Festival is up and it’s filled with great events. We were able to make it for a few sessions last year but unfortunately will not be able to travel this year due to the imminent arrival of mini-me.
Posted by Dwayne D. Hayes at 12:27 PM 1 comment: