Want Some New Films from Norway?

It's a good time to be in NYC if you enjoy international literature and cinema. The PEN World Voices Festival got under way on Monday and includes events with over one hundred writers from forty nations.

And starting tomorrow (a special holiday in the Absinthe home office), the Film Society of the Lincoln Center will be presenting a program of new films from Norway.

But, unfortunately, we will not be there. We will be here.
Posted by Dwayne D. Hayes at 7:21 PM No comments:

Does the Novel Have a Future? Yes, and it has a past too

A response on literalab to Tao Lin’s article in the New York Observer.

Every so often the “Novel” is brought out on the stage of a newspaper, magazine or manifesto like a patient about to go under the knife in an operating theater. “Does the Novel Have a Future?” reads the headline of Taiwanese-American writer Tao Lin’s latest thoughts on the subject in the New York Observer. Yes, here we go again.

From André Breton to the author of Reality Hunger David Shields, the anti-novel party has proved remarkably resilient, prophesying the literary form’s decline without letting themselves be distracted or discouraged by actual novels. No, like a Don Quixote who hasn’t become deranged by novels because he is too busy predicting their extinction, they keep tilting at their theoretical windmill, while the novel plods along seemingly unaware.

A successful young novelist himself, Lin is not presenting such a bleak assessment. In fact, it is not clear he is presenting an assessment at all. Whatever he is doing is immediately obscured in his opening paragraph behind the barbed wire of sentences like this:

“I discerned this afresh while studying said discourse for my addition, arguably, in terms of ‘the future of the novel,’ to the discourse. My addition—herein, itself a distraction from the composition of my third novel—summarizes part of the discourse I’ve studied …”

Huh? Okay, back to the novel and its questionable future. What follows is an amusing but extremely limited summary of critical opinions on a handful of American novelists dating from 1976 (pre-history for Lin, who was born in 1983). The fact that the article is illustrated with a photo of Tom Wolfe is not a particularly good omen. Is this Colonel Sanders look-alike the right face to illustrate the question of whether the novel will live or die?

The summary brings up some key American debates on fiction, but is so narrow and provincial that what it leaves out is more significant than what it contains. The only foreign names to be found in it are Zadie Smith, Emile Zola and Attila the Hun. You wouldn’t otherwise know that over the past 35 years the definition of the novel has been challenged, transformed and expanded by writers like Gabriel García Márquez, Milan Kundera, Georges Perec, Thomas Bernhard, Roberto Bolaño and W.G. Sebald among others.

In fact, what Lin presents as a contentious debate over an art form ends up looking like a faculty room tiff at an MFA program. Barthelme, Barth, Cheever, Vidal - the fate of the novel? What novel? This soon becomes clear enough.

Kundera has defined the novel as a “prose form in which an author thoroughly explores, by means of experimental selves (characters), some great themes of existence.” There are many other definitions of course, over many centuries and across different cultures. Yet there is a tendency in the US and its MFA writing culture to take a much more ahistorical approach.

According to Lin’s vapid pop psychology explanation, the writing of poems, short stories, essays and novels appeal “to those who feel unsatisfied with verbal communication because of social anxieties or persisting feelings of loneliness/misunderstanding or simply a desire to communicate more accurately or elaborately …”

And Lin builds up to what amounts as his manifesto, a Francis Fukuyama -like end of literary history. The relation of one novel to another no longer matters, nor do the “great themes of existence.” Each novel should be judged on its own merits, as an attempt by the writer to communicate. Write a realistic story of your suburban childhood or your cross-country road trip after sophomore year. Write a metafictional story from the perspective of the tip of a pencil. It’s all valid, and innovation and originality no longer matter.

This view of writing is a godsend above all for those writing students who haven’t gotten around to reading very much yet. It is writing as therapy, and after Lin states that he isn’t interested in reading novels that are “improvements or innovations on other novels” (and so is likely to read a lot of bad, unoriginal novels) he concludes by narrowing down his interest in reading novels into two questions, voicing the ultimate in MFA writing-as-therapy mantra:

“But mostly I want to know, ‘What are you thinking about?’ and ‘How do you feel?’”

I think the novel will be just fine. At least, that’s how I feel.

Posted by Anonymous at 3:41 PM No comments:

Who is the First Person to See the Cover for Absinthe 15? 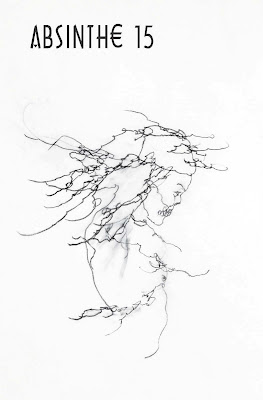 Chloe Piene's art appears on the cover and in an 8-page portfolio.

The issue will be out in a few weeks. Subscribe now and you'll receive Absinthe 15 hot off the press.
Posted by Dwayne D. Hayes at 7:42 PM No comments:

Playing straight to the audience

The guest of honor at this year’s Days of European Film was Austrian actress Sophie Rois, who arrived to present her work in Tom Tykwer’s latest film “Three” (Drei). While taking a few days off from her frantic theatrical performance schedule, and just shortly after having been awarded the Lola for Best Actress — the German equivalent of an Oscar — for “Three,” Rois talked to Czech Position about what it meant to her to come to Prague for the festival.

“I was flattered by this invitation because it’s a country with a great tradition in film, a big avant-garde tradition and a tradition of being very witty and funny,” Rois said. Although she couldn’t produce a list of directors’ names, she said the type of film and theater produced here is close to the type of work she prefers to do, particularly in the more experimental and open world of the theater.

Not that her experience of Czech cinematic culture is confined to the avant-garde. “In the late ’70s and early ’80s, I went to Berlin several times and, of course, you could watch TV from the GDR (East Germany). They had a lot of Polish and Czechoslovak films, and as a child I remember Der kleine Maulwurf (Krtek) and Pan Tau.”

Posted by Anonymous at 3:52 PM No comments:

A preview of our music recommendations coming up in Absinthe 15:

Star of Love by Crystal Fighters
Zirkulo Records
Basque-via-London band Crystal Fighters has crafted a curious amalgam of influences on their debut album. Basque instrumentation is blended with various dance music styles, pop, and rock. A heavy metal guitar line runs through “I Do This Everyday”. The melodic synthpop of “At Home” reminds of Dream Academy’s “Life in A Northern Town” while “Swallow” welds dubstep bass breaks to folk strumming. Catchy and fun.

Revolution No. 5 by Sick Girls
BBE
The Sick Girls are a DJ/production duo from Berlin who meld various global urban music styles on this mix CD. The mix kicks off as dense and funky as prime Meat Beat Manifesto, moving on to connect the dots between the spare, echo-laden dubstep of Tricky D’s “Latin Seed”, the Baltimore club of Solly, Natalie Storm’s dancehall refix “Play Di Ting” and the Sick Girls’ own video game bleep/two-step shuffle “V-Skank”. Eventually, the music drops out, and the line “this chick is a sick individual” repeats over and over, drawing a close to an exhilarating 40 minutes.
Posted by Dwayne D. Hayes at 6:41 PM No comments: