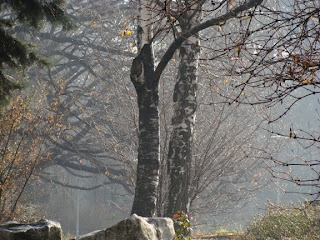 I think a lot about the line as the rain falls outside my window. We are specialists in the line and we draw them all the time. Lines around personal space, lines around property, lines around countries. You are generally punished if you try to cross them against another’s will. I write about the line because it seems to me the translator is constantly trying to cross the line. In fact, I often think of the translator as a terrified prisoner standing in no man’s land with his arms raised, striving in vain to talk sense to both sides, who are intent on continuing to fire at each other, God knows why.

The line. English is the only language I know where the ego or self is also a line: I. And of course the line is also the number 1. When God created the world, we lived in the era of A, the first letter of the alphabet. God (AM) created individual creatures (the indefinite article, an), in fact he created a man: Adam. He brought all the creatures to Adam to name, so that they would mean something. But egged on by the woman, who in turn was provoked by the snake (an erotic wriggly line), instead of saying amen to that, Adam said mine; instead of bowing to AM, Adam said I’m.

We went from the era of what to why (the line), from A to I. What do we do with the line now that we’ve got it? Funnily enough, my little son’s toy drum suggested the answer to me. In the lid of the drum are three holes in the shape of a circle, a triangle and a square. He has to fit these three shapes into the holes and the drum plays a tune when he’s successful. We can turn the line into a circle, as the rain in the sky (a straight drip) becomes a round drop when it hits the ground. This is equivalent to counting down, from 1 to 0. Alas, at school we only teach our children to count up from 1 and it takes them the rest of their lives to find out that the answer was just behind them.

We can also make reference to a third point, the source, and draw a triangle. This triangle is represented by the letter A.

Or, as I have already mentioned, we can draw a line through the I and make a cross sign (the Cross represents the I deleted), which also happens to be a plus (as Christ said, Those who lose their life will find it). The cross sign corresponds to the square.

So you end up with a circle, a triangle and a square: three shapes drawn with one, three and four lines (not two). What is extraordinary is that these three basic shapes spell a name we are staring at every time we sit down to do some mathematics (or to play with our son). I have already said the triangle is A, the cross is a plus sign and the circle is O. So the three ways of getting away from the line (or ego) spell another name of God, A + O: Alpha and Omega (present in the middle word, AND or A ’N’ O).

This progression from A to I to the O of recognition – which is the progression of the Greek alphabet (compare the Roman alphabet, which counts up from I to Z) – tells us the real question word is in fact not what or why, but who.

Who is truth? Pilate should have asked Jesus in John 18. Then he might have got an answer: I am (A I O again, the O is the Greek omega or w turned upside down). WHO is Christ’s name in Greek – O WN (written O WH in Slavonic countries), which means “the Being”, “the One Who is”. It is pronounced the same as hu, a Sanskrit word meaning “invoke the gods” and the root-word for God. WHO combines with EL, another name of God in the Old Testament, to spell WHOLE.

By denying the I, we come full circle. 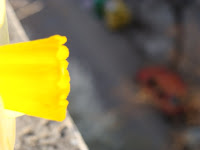 Posted by Jonathan Dunne at 6:44 AM