Be part of the first NYC Flash Mob that spotlights translated literature.

The Flash Mob is the culmination of the SMUGGLED GOBBLEDYGOOK project that is meant to challenge the dominating mono reading and language culture in the U.S., by "contaminating" the public space with foreign languages, as well as literature translated in English from any of the 138 languages spoken in Queens.

The mob was preceded by Book-Crossing, which will continue till the end of the Queens International (January 19, 2014).

The book-crossing is an ongoing public experiment that trades books over mainstream and off-stream social networks. Local immigrant communities or fans of international literature are invited to smuggle books in translation or in their respective native language into the museum and deposit them in the Flip-House*.

As an extension of the book-crossing, the multilingual flash mob uses the collected books to reproduce the Queens communities as a simultaneous read-aloud. At a precise moment the ‘mob’ starts reading out loud, then finishes exactly five minutes later, as suddenly as it begins. At this point, readers disperse and leave their readings in a specially designated box.

Please, come 10 minutes before the start of the flash mob and either bring your own reading material or pick up a book at the site. There will be a short instruction before the start.

Please, come to share your native language & literature, be it in translation or in an original form. You are as much welcome as a text-performer as just an observer!

Make sure to stay little longer and check the rest of the Smuggle Tactics’ works and get а wider picture of the Queens International exhibition.

Many thanks to everyone who has signed up for the Flash Mob or has donated book(s) so far. We have Armenian, Bulgarian, Check, Chinese, Korean, Finnish, Irish, Japanese, Macedonian, Polish, Spanish, Romanian, Russian, Polish, Turkish presence, including translations, donated from premier publishers of international literatures such as: Absinthe, Accents Publishing, Archipelago, Black Balloon, Dalkey Archive Press, Europa Editions, Grove Atlantic, New Europe Writers, Open Letter Books, Spinning Jennie etc. Special thanks to the Immigrant Movement International and the Queens Library who helped me reach out local communities.

*The Flip-House (visualized below) is the main stage of the Bulgarian Collaborative's Smuggle Tactics exhibition. 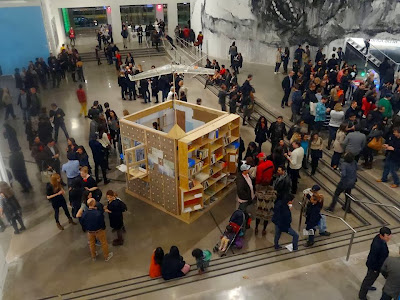