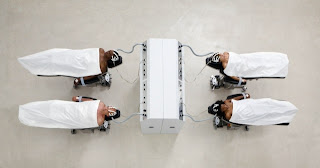 European film buffs know all about the festivals in Cannes, Venice and Berlin – even Karlovy Vary has become a familiar name on the festival trail. But for those looking for the new and next generation of European and world filmmakers it’s worth taking a look at the Fresh Film Fest which kicks off on August 24 in Prague. The festival focuses on directors’ first and second features, as well as having competitions and programs devoted to student film and animation.

Unlike the major festivals, where a retrospective is likely to be devoted to a renowned, internationally-celebrated figure the Fresh Film Fest is doing a retrospective of up-and-coming Hungarian director Benedek Fliegauf (b. 1974), whose fourth feature “Womb” just premiered this month.

For more on the festival read this preview article and I hope to have time to see some of the films and will provide updates shortly.

Photo (Fresh Film Fest) – A scene from “Transfer,” by Croatian-born German director Damir Lukačević – a sci-fi story of an older, rich white couple that pay to transfer their consciousnesses into the bodies of two young healthy African immigrants.