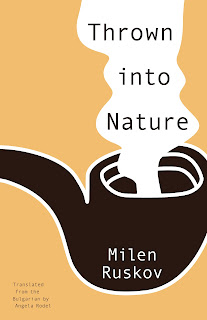 This is the fourth in a series of posts that will preview the upcoming issue of Absinthe, our 17th, focused on Bulgaria. In this post we present a brief excerpt from Milen Ruskov's novel Thrown into Nature.

from Thrown into Nature, translated by Angela Rodel

There is hardly anything more natural than hating Nature. Yet people don’t realize this due to their crazy ideas. For example, many think that this world is ruled by the Devil. As some of the ancients put it, the Devil saw the Kingdom of God and tried to make something similar. He is a sorry imitator, by their own admission. Yet not entirely inept, they add, and mighty cruel, too. But all of that is stuff and nonsense. Others reckon that the world is God’s doing. If this is so, then He is not who they think He is but just some moronic mad scientist. All that is stuff and nonsense, too. But if it’s not the one, nor the other, then what is it? — you may ask. That is a stupid question. This is what: the world is simply mad Nature’s work. Which is precisely why it looks the way it does, since it is her work. She is absolutely mad, the incarnation of chaos, a game of blind chance. I feel a deep-seated hatred of Nature. Yes, I do! If there is something I deeply and truly hate, it is Nature. Is there anything more endlessly energetic, more lavishly fertile and at the same time crazier than she? Of course not! If Nature put on a human face and strolled around the streets of Sevilla, she would have long since been locked up as a dangerous maniac, perhaps even burned at the stake by the Inquisition. She would be of the female sex, of course, giving birth to a child every five minutes, laughing and jumping about at the same time, and impregnated without a visible agent, as if by the wind itself. Yes, Nature is absolutely mad!…. READ MORE by ordering Absinthe 17.


Thrown into Nature was published in 2011 by Open Letter Books.