Best Picture Oscar: The Artist vs. The Descendants 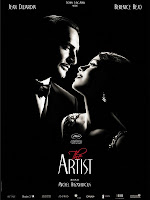 It's not been a great year for us to get out and see movies here at Absinthe HQ but we did manage to see the two front-runners for the Best Picture Oscar, The Artist and The Descendants.

We're in agreement here on these two films: we both loved The Artist and would happily see it again tomorrow, and while we acknowledge that The Descendants is well-made, finely acted, and has a good script (though some of it was rather unbelievable--Clooney's character asks his teen daughters' friend, Sid, for parenting advice and then in the next sentence tells him how dumb he is) we left the theater drained.

And in the end that tells me a lot about these films and who should win Best Picture. The Artist is a movie that celebrates cinema and is one you'll want to see again ... I certainly doubt I'll ever have the inclination to sit through The Descendants again.

Which film do you think will win?