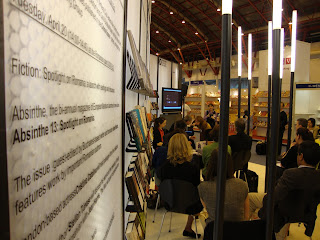 Fellow Dzanc Books imprint Black Lawrence Press has published a collection of poems by Friedrich Dürrenmatt, the prominent Swiss novelist, playwright, and essayist, who died in 1990. The poems are translated by Daniele Pantano, a Swiss poet, translator, critic, and editor, whose own poems appeared in Absinthe 10. I definitely recommend picking up a copy.
Posted by Dwayne D. Hayes at 11:03 AM