The Doisneau You Don't Know

After a recent visit to Avignon, France, I was enamored with an exhibition of Doisneau's works at the Musee Angladon-Dubrujeaud. The museum itself is a treat; teeming with European charm, it is the former house of Jean and Paulette Angladon-Dubrujeaud whom are 'heirs of the famous Parisian couturier and collector, Jacques Doucet'. Painters and engravers themselves, they generously donated their former home to showcase works from the 18th-20th century including some little known, but no less impressive works by Degas, Van Gogh and Modigliani. My favorite Modigliani they displayed was, of course, a woman sitting in a chair. Also, the little known Vang Gogh struck me for it's typical Van Gogh style, but an out of the ordinary subject-trains. 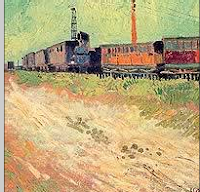 Among the impressionist and expressionist works of the past two centuries, the black and whites of Doisneau were a wonderful contrast to the malleable lines and vibrant colors of the paintings. When most people think of Doisneau, images of the Paris that everyone dreams of are conjured up within a moment. His ability to capture what is uniquely "French" and perhaps even Parisian have been mass produced on everything from coasters to posters. But his portraits of artists and well-known figures add another dimension to his work. True, there is the presence of his inimitable eye in all of his work, but these photographs bring an intimacy, depth and humor to his oeuvre. These two following photos, Picasso with Bread Hands and Cesar Baldaccini (The Sculptor Cesar in his Workshop, show all of these elements as a perfect balance.

It's impossible to ignore the overwhelming sense of nostalgia that imbues his work, but when he turns his lens on fellow artists the positivity and compassion is evident. He makes us see in them what he sees in them. And that is what is magnetic about his work. Gazing at a photo of an artist working on a painting, you see the levels he was trying to uncover in his mind. The subject with his art as a subject, as if we are looking into a creative spiral. If you're in the neighborhood of Avignon, this is an exhibit to make a point to see.