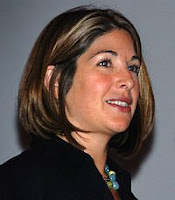 Naomi Klein this week won the inaugural 2009 Warwick Prize for Writing for her book The Shock Doctrine, a study of the rise of “disaster capitalism”, when moments of collective crisis with people traumatized, such as 9/11 or the tsunami, are used to usher in radical social and economic change beneficial to Wild West corporations. Naomi Klein is a Canadian journalist and filmmaker.

The Warwick Prize for Writing is an international cross-disciplinary award given biennially for an excellent and substantial piece of writing in English on a theme that changes with every award. The theme for 2009 was Complexity. It is awarded by the University of Warwick in England with a price tag of £50000 or $70000.

Also on the shortlist were: Mad, Bad and Sad by Lisa Appignanesi, The Art of Political Murder by Francisco Goldman, Reinventing the Sacred by Stuart A. Kauffman, The Rest Is Noise by Alex Ross and Montano’s Malady by Enrique Vila-Matas (tr. Jonathan Dunne, the only book of fiction).

The theme for the 2011 Warwick Prize is Colour.
Posted by Jonathan Dunne at 5:27 AM