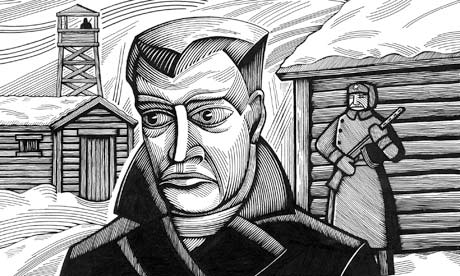 Language, territory and conflict dominate the work of Nobel prize laureate Herta Müller. She was born in Romania, part of the German minority settled in the Banat region since the 18th century, and the history of her immediate family reflects the turmoils of war and displacement. Like many other Banat Swabians, her father volunteered for the Waffen SS during the second world war. Her mother, like thousands of other ethnic Germans between the ages of 17 and 45, was deported to a forced-labour camp in the Soviet Union after the war. She spent five years there.
Müller grew up under the Ceausescu régime, and her novel The Land of Green Plumsbrilliantly evoked the sordid, even banal nature of this totalitarian society's grasp on its citizens. Her imagery is startlingly distinct and yet nightmarish. Behind every familiar object – a plum, a key, a rope, a single hair – there is, as in a fairytale, a hinterland full of shadows and silence. The weight of what cannot be said drags at the narrative line. The Hunger Angelshares this poetic intensity of focus, shape-shifting language, and a structure of brief chapters that talk to one another indirectly. This hidden rustle of conversation between fragments slowly reveals the enormity of the whole.
When deported Germans returned to their homes, the political climate meant that their story had to be whispered, if told at all. Many thousands had died, among them the friend of Müller's mother, after whom Herta would later be named. As Müller says in her afterword toThe Hunger Angel: "The deportations were a taboo subject because they recalled Romania's fascist past." More than 50 years later, she began to challenge this enforced silence by talking to former deportees from her own village, and through lengthy conversations with the poet Oskar Pastior about his years in a Soviet forced-labour camp. The idea of the two writers collaborating on a book developed, and Müller took extensive notes from Pastior's testimony. After Pastior's death, Müller decided to continue alone and write her book, which was published in German as Atemschaukel (Breath Swing) and now in Britain as The Hunger Angel.
The novel is narrated in the voice of Leo Auberg, a 17-year-old who is just discovering his sexuality as something "strange, filthy, shameless and beautiful". Leo's encounters with men in park pavilions and in the Neptune Baths would land him in prison or a penal colony if he were caught. Instead, because of his German ethnicity, his name is on a list anyway, and he is to be deported to a forced-labour camp. The boy makes a suitcase out of a gramophone case, and fills it with Faust, a volume of poetry, aftershave, socks, a burgundy silk scarf … Every item is scrupulously detailed. Not only will each make a difference to survival, but, as in all Müller's fiction, each object possesses a force that will only slowly disclose itself. What Leo's grandmother gives him are five words:Ich weiss, du kommst wieder – "I know you'll come back."
To be a survivor, however, is a complex and sometimes terrible thing. Leo has been given over to a world that those who remained behind cannot guess at, and neither can they realise his anguish, disconnection and rage when he returns home five years later. In The Land of Green Plums, Georg throws himself from the high window of a transit hostel, six weeks after emigrating from Romania to Frankfurt. Or perhaps he is pushed. At all events, the dream of escape turns out to be an illusion. InThe Hunger Angel, the fact that Leo has come back from the camp is "a stroke of crippled luck" and "a survival top that starts spinning at the least damned thing". He is not free, and he knows it. The telling of his tale in all its intricate and wretched detail is perhaps the only thing that animates him.
The detail is extraordinary, and Müller credits Pastior for her knowledge of the camp's everyday life. However, the novel's inwardness of vision is something Müller owes to her imagination alone. Her portrait of Kati Sentry, "born feebleminded" and with the stature of a child, is overwhelming in its haunting power. Kati is in the camp because someone has substituted her name for another's on the list, or perhaps out of simple sadism. She cannot labour, or understand "what a quota is, or a command, or a punishment". Instead, she flutters her arms and coos like a dove, or sits on an anthill to make herself gloves out of ants. Crucially, the hunger angel cannot climb into Kati's brain and destroy it, because she is already in another world.
This is a remarkable novel, both bleak and chastening. Leo may be at home again, but within him the camp "stretches on and on, bigger and bigger, from my left temple to my right".
• Helen Dunmore's The Greatcoat is published by Hammer.
Posted by Jasmina at 8:00 AM