Jasmina Tacheva talks with the Bulgarian playwright Mayia Pramatarova about her latest play that will be performed Off Broadway at the Fourth Street Theatre from Jan 29 to Feb 3, 2013

Jasmina Tacheva: Hi, Mayia, how is the preparation for the premiere of Don't Take the Bridge going?
Mayia Pramatarova: There is less than a week left to the premiere! That's the most intense time, when you wish you could split each second in two.

JT: How would you describe the steps from finishing the script to the play's premiere on the stage of Fourth Street Theatre?
MP: The show of onewaytheater.us comes nine months after the reading of the play. Our team was formed during that reading and this has affected the process. It is very interesting for me to observe how the stage text is built upon its dramaturgic foundation. I find it very fruitful that each member of our team has both European and American theatrical experience - the specific language of the performance occurs at the intersection of the two. 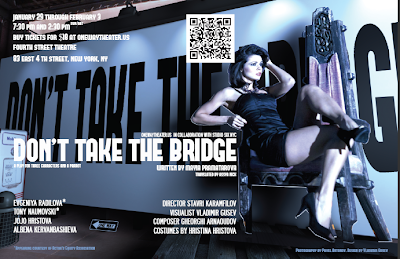 JT: What were the main catalysts for the emergence of this script?
MP: A major challenge for the emergence of the script was the city of New York itself. I have been living there for two years already. The characters in the play meet in this city and both the clash and the attraction between them stem from it. The story is set in an apartment inhabited by passions and mysterious sounds that turn space into an actual character of the play just like they do with, by the way, time as well. Everything is connected and there is no clear articulation of past and present, the real and the imagined, myth and reality. Two of the characters have biblical names Sam(son) and Dalilah, and in some strange way their fates rhyme with things that have already happened in the past.

JT: How is your work with the director Stavri Karamfilov going? What about the composer, maestro Gheorghi Arnaoudov?
MP: I've known Stavri Karamfilov for many years and I am glad that our meeting during the onewaytheater.us's performance of "The Revolver" has lead to a new, mutually enriching and provoking process. Through Stavri I was able to look at the script in a new way, and through his dynamic analyses the cast was able to penetrate the characters and make them come to life. We work as a team and in this sense, the music of Gheorghi Arnaoudov is a continuation of what speech and gestures cannot express. Moreover, it is a character that converses, or enters into a conflict, with the action.

JT: My personal opinion is that one of the unique features of Don't Take the Bridge is the universality of ideas and messages it conveys. In this sense, I am convinced that it will be equally interesting to the American and the European audience alike. How did you achieve this effect?
MP: The world is united and you can't speak local languages ​​without universal ideas. In my work things always happen somewhere between the specific details and the metaphysics of what is going on in the specific moment which affects the characters in seemingly ordinary situations. In this sense, the bridge in the title is as much an actual bridge, as it is something absolutely abstract that connects two separate points in life. Everything, then, is of ambiguous character. And hence the playful nature of the script, elements of which we still keep discovering during the rehearsals and that sincerely amuses us.

JT: How did you select the cast members for the show? What can you tell us about the way they impersonate and interpret the characters assigned to them?
MP: There is always the two-way coming-near of the actors to the script and of the script to them, it's a romantic story and it couldn't be anything else under the conditions of work we have to overcome together as a team.

JT: Could you tell us what the stage will look like and what the role of Vladimir Gusev's visual effects will be?
MP: Vladimir Gusev is a man of conceptual thinking who never starts working without a vision built together with the playwright's and director's general visual idea for ​​the show. His decision was to fit the whole story in the context of an apocalypse that has already happened and let the actors approach their respective characters in reverse order, from the tragedy to the beginning which, although bright, romantic and beautiful, has been containing the drama within itself from the very start. Technology is not in isolation but is part of the overall stage canvas.

JT: What can the audience expect from the show?
MP: The viewers won't be mere spectators, there will be no explicit division between those performing and those watching. That is why the show of onewaytheater.us will be staged in the black box of Fourth Street Theatre, which is not separated with a ramp. We will all be together there and will muse upon our lives in real time.

JT: This is not your first show on an American scene - what makes you continue working and how can you explain the success of your previous performances?
MP: The first two performances of onewaytheater.us had their premiere in Boston. This time we are dealing with a premiere in New York City and this is a challenge of a different sort. I doubt we would have agreed to do it, was it not for our team work and the support we've been getting at all levels - from colleagues and friends. Our colleagues from Studio Six, a formation of American actors who have received their education at the School of the Moscow Art Theatre, are with us as well.

JT: You are part of radio shows of the Bulgarian National Radio; you write for various Bulgarian and Russian media - is this the projection of the modern person for you – a cosmopolitan that, no matter where he or she is, is never too far from anywhere?
MP: For me, time and space are relative categories and at the same time I am trying to understand why a show has appeared on that stage in that particular time. Vladimir Gusev and I maintain a theater site, post.scriptum.ru, which provides a coordinate system that depicts the location and time of the appearance of a theatrical event, because there are no mere “new shows”, but rather performances that voice specific people in a specific way.

JT: What do you think will happen after the first series of performances of Don't Take the Bridge and how will you proceed?
MP: I have an idea for a new play, but I try to drive it away while rehearsing and take notes, "secretly from myself." The characters have long been in my head, and the specific story occurred to me on the subway, who knows why, but the story lines that bind the non-linear stories of my scripts always dawn on me when I am on the move. Non-linearity is difficult to recreate on stage, it involves a network of relationships and power units and I am glad that we found faithful adherents in the face of the cast: Evgeniya Radilova, Tony Naumovski, Jo Jo Hristova and Albena Kervanbashieva.

Find out more about the show at http://www.brownpapertickets.com/event/308979
Posted by Jasmina at 8:00 AM