A Roundtable on Margarita Karapanou 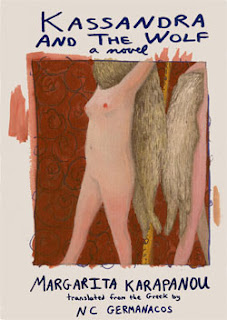 In the new issue of The Quarterly Conversation, Hilary Plum moderates a fascinating discussion about Greek author Margarita Karapanou--author of several novels, including Kassandra and the Wolf, Rien Ne Va Plus (recommended in Absinthe #13), and The Sleepwalker, all recently published by Clockroot Books.

Writer Angela Dimitrakaki, Karen Emmerich (the translator of two Karapanou works, her translation of a story by Ersi Sotiropoulos appeared in Absinthe #11), translator and poet Nick Germanacos, author Amanda Michalopoulou (her book I’d Like, translated by Karen Emmerich and published by Dalkey Archive Press was recommended in Absinthe #14), and Karen Van Dyck, director of the Program in Hellenic Studies at Columbia University in New York, participated in the discussion.
Germanacos starts off by recollecting how he came to translate Karapanou:

... Margarita K. and I discovered we had much in common. She, too, then left for Paris to join her mother, and on her return shyly showed me a large notebook in which, in her characteristic childlike scrawl, were a dozen or so pieces of writing, some just one paragraph or two long, others a little longer. I was stunned by their power as well as their unique form. I told her they were brilliant and that if she continued to write more, they could be turned into a book. She was incredulous at first, but was eventually convinced, and applied herself to the task. I undertook to translate each one after she wrote it, and would do my best to find a publisher in the US. Any consideration of publishing them in Greece was out of the question a) because they would have to be approved by the stupid, prurient military censor, and b) because writers in Greece had determined, following the example of Nobel Laureate George Seferis, not to publish their work in Greece while the country remained subjugated by the military junta.

Thus began our two-year collaboration on what became Kassandra and the Wolf. I myself had suggested the name Kassandra for the child-heroine, which she readily agreed to adopt, but she rejected my suggestion of a title—The Hour of the Wolf—although the phrase does come up, trenchantly, in one of the vignettes. Of course, in our discussions during the process of her writing, her opinion (when we disagreed) prevailed.